Fish Huts, Sleds, and Good Times on the Ice 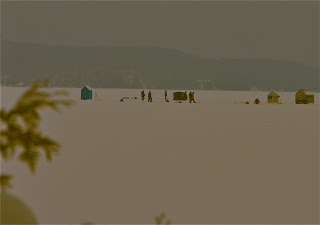 There was no shortage of activity around the lake this weekend. Gloria send us these pictures, taken near Bigwin Island, of the Fish Hut city that has sprung up again this winter.


Don't have one? Well, you can snap up one, advertised on this sign stuck in
the snow at the lake's edge. 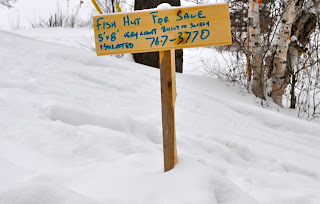 Need a way to get there? The 'boys' were whooping it up (without a helmet in sight... I guess they figure if they're just to-ing and fro-ing from the fish huts they are invincible... )

Speaking of invincible, there is another World Record attempt taking place, Feb. 15 when Nick Musters 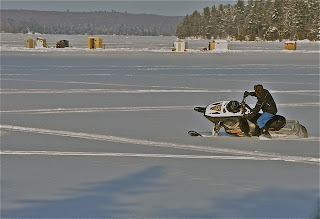 from Utterson attempts to break the world record for the most distance travelled in a 24 hour period on a snowmobile. He's promoting breast cancer awareness (will he be sporting pink ribbons on his sled? He's got plenty on his website!)

He'll be running a track around Bigwin Island. You can drop by and wish him luck, or make a donation, at the Norway Point Park access, off Hwy 117.

Christmas is coming ! Bring the kids to the great outdoors (and you as well).

We are now accepting reservations for two night stays and weekend packages duringOctober -- the fall colours are astonishing, and on our own 600 acre property, there are so many walking trails and lookout views that there's no need to battle traffic into the Park just to see the beauty! Algonquin is always amazing, but during high colour season, best seen mid-week. There are so many other wonderful places around where you can enjoy the autumn without the congestion of the road, and we are happy to direct you to them.
We have great deals during the fall season, for couples, up to small groups of 18 people.
And don't forget Winter -- we've got vacancies for Christmas! We'll provide the tree, and you bring the family.
We've got a fantastic place to gather, enjoy the scenery, relax by a fire, and spend time with family and friends. Whether a quiet couples' getaway, or a family reunion or a club outing , we've got your cottage waiting.