Posted by Nancy Tapley at 5:12 AM No comments:

it is spring... think about summer

Published by David Tapley · May 5 at 6:49 PM ·
The water is still high but the ice is finally gone! If you weren’t thinking about your summer vacation already it’s time to start! #muskoka#cottagerental #summervacation #lakeofbays #airbnb

Posted by Nancy Tapley at 5:11 AM No comments:

An almost perfect set up, with massive snowfall this winter and then torrents of rain pouring into that snowpack and the rivers, as they say, rose... 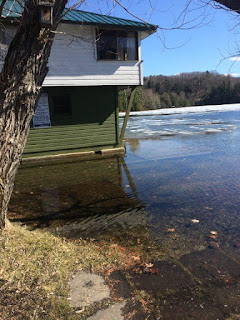 Like falling isn't what hurts, it's the landing that gets you, when lakes flood it isn't so much the water and the moving ice that is of concern.

This is Anchor... with the docks underwater and the ice on the march. 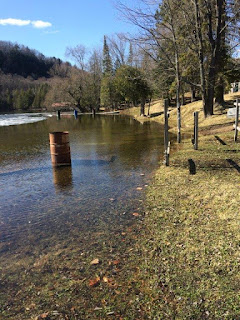 Looking down the shore, there's Clover's dock under those distant barrels.
The barrels, full of water, weigh about 700 lbs. and keep the waves from lifting up the planks. 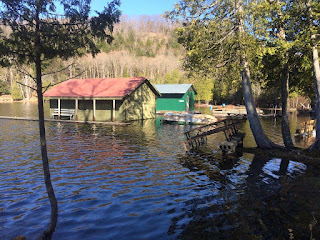 No bonfires right now at Springside's cookout beach
There is no beach!  But the water if finally coming down
We sill be able to sit on the bench without getting wet feet by summer. 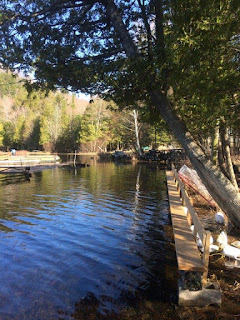 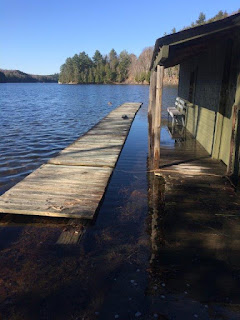 That is Beaver's dock, tied to Springside. It did not fare so well,and was shoved off the cribs, which were also smashed. The ice apparently took a dislike to this one.  We'll try to salvage what we can... 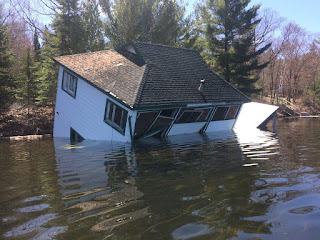 A lot of our neighbours around the lake were  not so lucky as we were.  When ice is this high, it floats into the support system and quite literally knocks the legs out from under the buildings. Nothing stops ice. Not iceaways,nothing. When it starts to move it movesl  Vertically it has no strength, but horizontally it is honeycomb in structure and terribly strong. 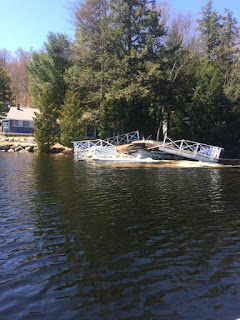 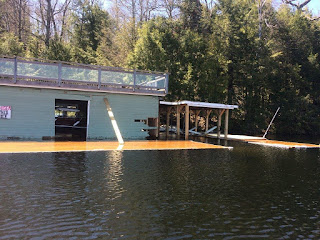 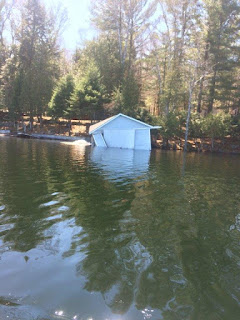 Posted by Nancy Tapley at 5:10 AM No comments:

Published by David Tapley · April 27 at 10:46 PM ·
There’s a dock under there somewhere! The lake is still rising and is now more than 6” over our main dock! We just keep reminding ourselves that summer is coming!  We've got some photos from the April/May flooding that put Huntsville, Bracebridge and Gravenhurst in a state of emergency -- in the next post.  We had flooded docks, one swept off the cribs , but everything else is high and not affected.

Posted by Nancy Tapley at 5:00 AM No comments:

The moose are loose

Published by Nancy Tapley · April 21 at 8:50 AM ·
'tis the season... Algonquin Park. Come stay with us and trek into the Park to say hello. The deer are on our lawn, the moose on the Park roadside... you can have it all! Thank Meredith Boddington for the photo. #bondicottageresort
#wildaboutus
#muskoka

Posted by Nancy Tapley at 4:56 AM No comments:

Published by Nancy Tapley · April 23 at 12:36 PM ·
The Long family have been coming here for so long that in the 1960s when they needed a bigger cottage for their growing family Paul built them one. At Easter our Piper met their Lucien -- the same age. He is the great grandson of the first generation to stay here. So wonderful to see these roots grow through the years #familycottage #muskokatraditions #bestholidaymemories.

Posted by Nancy Tapley at 4:56 AM No comments: