Get Out. Stay Out. Look Up. 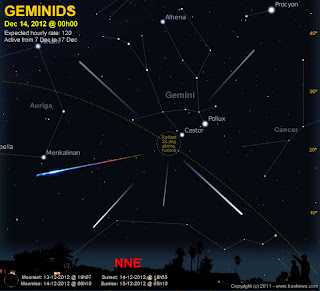 Every August we head out onto the lawns at Bondi Village late at night to watch the famous Perseid meteor shower. The big plus to the Perseids is that the nights are usually pretty darn mild. Some of the other meteor showers that put on yearly shows are not so considerate.

But it's not all that cold out there this week, in the greater scheme of things, and right along with the calendar clocking up 12/12/12 (and the looming Mayan 12/21/12 hoo-ha) along comes one of the best celestial performances of the year. If you are outside tonight, you'll see shooting stars. The Geminids are here, and will hit peak on the night of the 13th, early morning of the 14th (2 a.m. is the optimum time, but if that's too late for you, don't worry, you'll still see stars falling. Well, not stars to be accurate, although these are what we wish on traditionally)

The Perseid shower is produced by Earth running into the debris left behind by the Swift-Tuttle comet.  The Geminids are different -- the meteor shower here is caused by the deep sky object 3200 Phaethon -- thought to be a Palladian asteroid with a rock comet orbit, and one of only two meteor showers not originating from a comet. 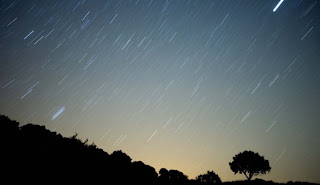 These are slower moving, and this year, pray for clear skies because with no moon it could be quite the show. The Geminids have been intensifying every year and recent showers have seen 120 to 160 meteors per hour in the 2 to 3 a.m. time frame.


A bit of a modern phenom, the Geminids were first observed in 1862, much more recently than other showers such as the Perseids (36 AD) and Leonids (902 AD).

An added bonus this year is the chance that you might also see Northern Lights. We've been seeing them through November, at low levels, but always more than welcome in our skies.

So out you go. Take warm clothes and a mug of hot chocolate.

After all, if we never look up, there will never be stars.

Make a wish upon a Star -- what better time of year to do just that?