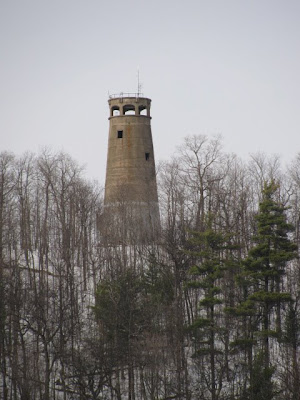 The Bigwin water tower is one of the iconic landmarks of Lake of Bays. It was built during WWI, while the resort itself was being developed. Much of the labour was provided by PoW's from Germany. Not a totally bad gig, really -- living on a beautiful island in Muskoka, sunshine, water, good food... Not to mention all the mosquitoes and blackflies you could possibly want. Still, when one considers the options of PoW's around the world, this would be pretty high on the desirable list.

Building the tower wasn't so easy. It's cement. So first you have to gather the tools. The cement itself came by barge from Huntsville. It was off-loaded onto the Portage Flyer train at North Portage, on-loaded onto the barge on Lake of Bays. Water was easy -- the barges were sitting on all the water you could ever want to mix the stuff. But gravel was an issue. The closest, most accessible gravel came from a pit dug at Bondi. Today that same pit houses our tubing run, and the beginning of one network of our cross country ski trails and hiking.

Gravel was removed, one wheelbarrow at a time, from the pit, and wheeled down to the barge at the lake. Next morning that barge would leave, loaded, and be replaced by an empty one. It kept men busy, for several building seasons. Grandma Tapley made some extra money for the farm by feeding the men lunch and dinner, from food grown right here on the farm.

The story goes that there were two styles of wheelbarrow in use. The more common one had metal wheels, was heavy and cumbersome. The new-fangled invention, cutting edge, had a rubber tire. C.O. Shaw, who owned and built Bigwin, didn't mind if the men with the old style wheelbarrows worked at a walking pace, but if you had one of the new wheelbarrows, he expected you to run... 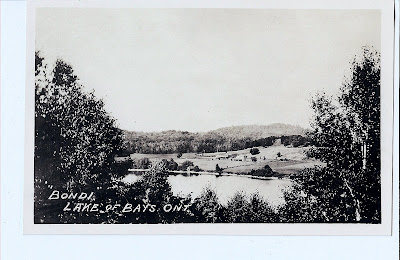 Good luck with that. The old postcard of Bondi, taken from Lumina Hill sometime in the late 1920's shows clearly the hill behind the farmhouse dug away.

Once the cement was mixed, it still had to be moved up to the tower location. To permit gravity to feed the water down to the resort, that tower was on the highest point of land on the island. A pulley system was rigged through the bush, and the cement was moved up in 5 gallon buckets hooked to this pulley. One after another, sort of akin to the Sorcerer's Apprentice, and probably feeling just about as endless to the men doing the labour. 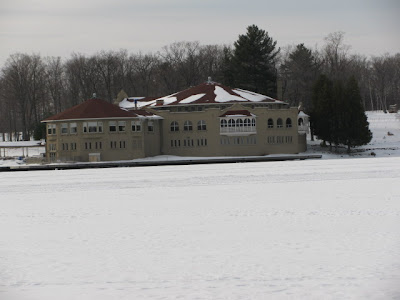 One thing about C.O. Shaw -- he built to last. C.O. used to drop by the original construction site, and take a sledge hammer to the walls to see if they were up to his standards. Apparently they were. When Bigwin Island began redeveloping recently, they found that the cement walls of the main circular buildings was so strong, it could be more easily restored than demolished, with the end result that the Lake of Bays retains perhaps its most iconic historical structure, rejuvenated and ready for the next chapter in her history.

Email ThisBlogThis!Share to TwitterShare to FacebookShare to Pinterest
Labels: Bigwin Island. Lake of Bays. History of Lake of Bays.