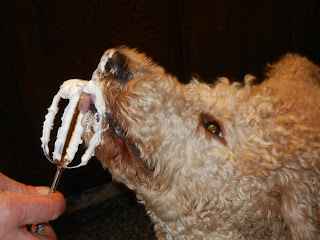 Christmas involves getting together with family and friends, an activity that seems to gravitate to the dining room table.  After all, where better to gather to celebrate than at the sharing of great food?
All of which means that a lot of time is taken up with preparing that food. There is the traditional baking of cookies and goodies, preparing the main meal, trotting out treasured family recipes...
I have my Mom's very old, very tattered recipe book. It was given to her in the 1930's. In the margins, she wrote down adjustments to favourite recipes, comments on the end products, and --most interesting of all -- notes about what was going on with the family: dates of births, deaths, weddings, notes on unusual weather, or on interesting people that were sharing one of the meals.  The book is a labyrinth of information, the best of which has nothing to do with food. 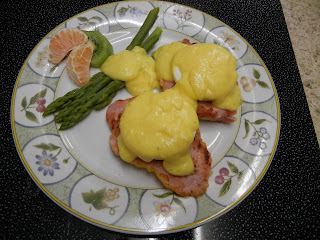 People all have different traditions at Christmas. One of ours is that David and I make the breakfast. Carol makes the actual Feast (and it is always spectacular).  My role has evolved from the early days, when I had to help David every step of the way as we whipped up Eggs Benedict -- where his contribution started out as simply stirring the hollandaise and setting the table.  Now all I really have to do is blend the fruit juices and make sure the muffins don't burn in the toaster.  The lad has a solid grasp on the making of a World Class hollandaise sauce, and knows his way around a kitchen.
We enjoy a lot of food this time of year in which we wouldn't indulge during the rest of the season.  One item is the traditional "killer eggnog."  David and Mike helped with the construction this year. Good thing we have chickens, since the recipe opens with LOTS of eggs. It then moves on to whipping cream, sugar, and a dash (or two) of whiskey and brandy. Taffy has never seen the process before, and was enchanted to have the two young men whipping up a storm in my kitchen.
And speaking of foods in which we don't usually indulge -- while Taffy did get to lick one of the beaters, it's not a habit she should get used to.
For all of those who, like me, perhaps overindulged in fabulous foods, be of good cheer.  One of my Mother's quotes, inscribed in her recipe book above one of the Christmas pudding recipes... "It doesn't matter what you eat between Christmas and New Years.  What matters is what you eat between New Years and Christmas."
So very true.
Enjoy!
Posted by Nancy Tapley at 8:33 AM