Lights Up, Limbs Down, Candles Lit 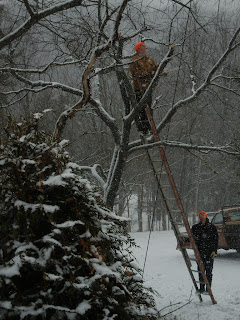 In the snow that was falling like it belonged in a Hollywood movie, Brian monkeyed up the ladder and nipped off a few branches that were threatening to gently jostle the hydro line.  Best to stop that before the winter storms come along -- trees and hydro lines don't play well together. 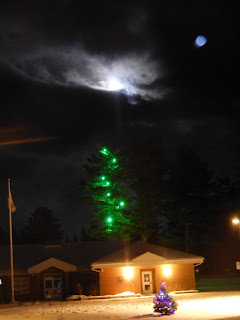 Over at the Dwight Municipal Office and Library, Phil Pavey loaned the use of his spider-lift to help string trees into the big white pine.  And we do mean big.  This was part of the Friends of the Library initiative this year to Light Up Dwight.  They "done good."

We'd suggest leaving this up there year round. Maybe they could light up on the August long weekend when the local firemen host Firefest at Dwight Beach. 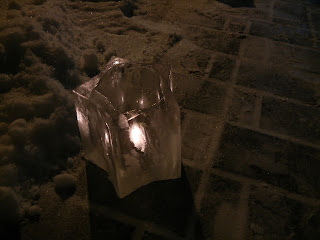 Not as lofty as the pine, the tea light shining in the ice-star is a perfect Christmas season accent.  All you need is the mold, and a place where the forms can freeze.  A friend told us that her freezer this week held nothing but these lovely lantern-shades.

If Martha Stewart isn't stopping over, you can get a low-cost version by simply freezing water in a small bucket until only the centre of the bucket remains liquid.  The effect is very much like this -- but of course, there is something totally charming about the stars shining along walkways.

The bright lights are one of the very nice things about this season, when it gets dark early and the colours in the land have dwindled into muted blacks, whites and grays.

We're Christmas Season ready up here in North Muskoka.  And we can't wait to see you!