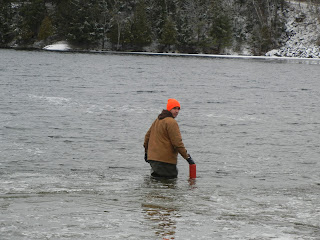 Never mind wading into the malls for some Boxing Day madness... David donned hipwaders and stomped out into the lake to retrieve the red marker that sits on the water intake.  The ice, alternately shifting and forming along the shore, pushed by the wind and current, had knocked it off its stake. 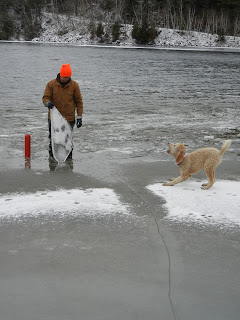 Now, even wearing hipwaders, its chilly in there.  In the chapter wherein Dave had to reach underwater to locate the stake, he discovered there was a small hole in one glove.  That water is cold. Never mind all that nonsense you see in the movies where the hero dives into the frozen lake -- it's breath-stoppingly cold in there.

He hoisted an iceberg, to show how thick the ice is. About an inch or so -- which quite obviously is not enough to support a person.  It is enough to support Taffy. She got a good education in thin ice today.  As David stomped about, cracks formed and widened, the ice under her paws shifted and tilted.  She got pretty excited, trying to tell David he should 'Get Back to Shore!' 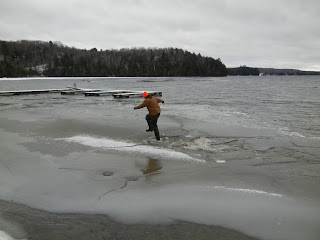 But, Boys will be Boys -- and who can resist splashing in puddles?  Not our Dave, who had some fun Stomping his way along the shoreline.
Good thing it's very shallow!
Of course, the hipwaders provide excellent insulation and keep him dry.  He's wearing layers. He's in very shallow water, with back-up (me, not the dog) in case of anything untoward.
Cold water is not to be taken lightly.  But that doesn't lessen the appeal of iceberg hopping.
Posted by Nancy Tapley at 8:51 PM